Despite their previous paradigm, which has looked down on the cannabis plant as ‘medicine’, delegates at the American Medical Association’s annual meeting in Chicago today agreed that physicians who do recommend medical cannabis, or medical marijuana, for therapeutic reasons should not be prosecuted. 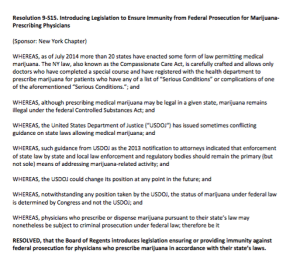 Voting on a resolution originally entitled “Immunity from Federal Prosecution for Marijuana Prescribing” the delegates agreed to remove the term “medical marijuana” from the text of the resolution and to substitute “cannabis”. They also changed the word “prescribing” in favor of language that described the physician as recommending the substance to a patient.

At this point, “Marijuana is not recognized as medicine by the FDA or the AMA,” said Stuart Gitlow, MD, in pushing for the wording change.

Historically, the group has had an unfounded resistance to the concept of medical use of marijuana. However, they agreed that in states where state laws allow the therapeutic or recreational use of cannabis, physicians who recommend it to patients for “an approved medical condition” should be guaranteed they will not face federal prosecution for doing so.

In their jargon, what they set forth in the resolution is that passing it would be “consistent with AMA policy to protect patient-physician communications about treatment options, supporting a public health approach rather than a law-enforcement focus, for individuals possessing cannabis for personal use and opposing government interference with the practice of medicine.”

In other words, take the plant out of the hands of law enforcement and leave it for the physician and their patients to decide for themselves if using cannabis based products will be beneficial for everybody involved. It should be the physicians’ right to exercise their clinical expertise regarding what may be the best treatment, and to make that decision without the risk of prosecution. That risk has held many physicians captive, preventing them from exploring a potentially more effective and far less harmful method in the treatment of dis-ease.

This news comes on the heels of the recent decision by congress to eliminate the DEA’s meddling in states that have already approved medical cannabis legislation, be it CBD Only laws, Medical Cannabis programs, or Full Recreational status for the plant.