Back in October of 2014, a report was published by Project CBD that more or less was part conjecture, part biased opinions, and (supposedly) part science. In this preliminary report, which was called, “Hemp Hustlers”, there were mentions of a test that proved there were heavy metals within a sample of a product that we carry called RSHO, or Real Scientific Hemp Oil. These tests were carried out by Stewart Environmental.

On 4/20, the damage control had officially begun, and it may not be from the company you are expecting…

David R Stewart, owner of Stewart Environmental, as a part of a settle agreement with Medical Marijuana, Inc (OTC: MJNA), has released both a written statement as well as a video (seen above) in which he clarifies the claims published in the Project CBD Report are patently false and were a part of test results that were not fully analyzed.

The video delves even further in the explanation, detailing how Jason Cranford, the person who commissioned the test, was given preliminary lab results by mistake, and plastered it across the internet, leading to many blogs and news outlets to pick the story up as absolute fact, without double checking their facts with all parties involved, including Stewart Environmental. It has also been confirmed that Mr Cranford has also settled in the case, and will be releasing his video testimonial soon.

It is also important to note that while all of the bashing against CBD companies was occuring, Project CBD decided to release some products that are direct competition to RSHO called ‘Care by Design.”

While this took a little wind out of the sails of the fledgling CBD hemp oil industry, we are already at the point of looking back and laughing as how silly this whole ordeal really is, and how important it is moving forward to have all of the facts in line and double checked prior to publishing defamatory remarks about any person or company. The entirety of the cannabis movement hangs in the balance, and we must carry on in a positive light to continue to bring progress on all fronts to bring clean and healthy cannabis based supplements and medicines to the people of our planet. 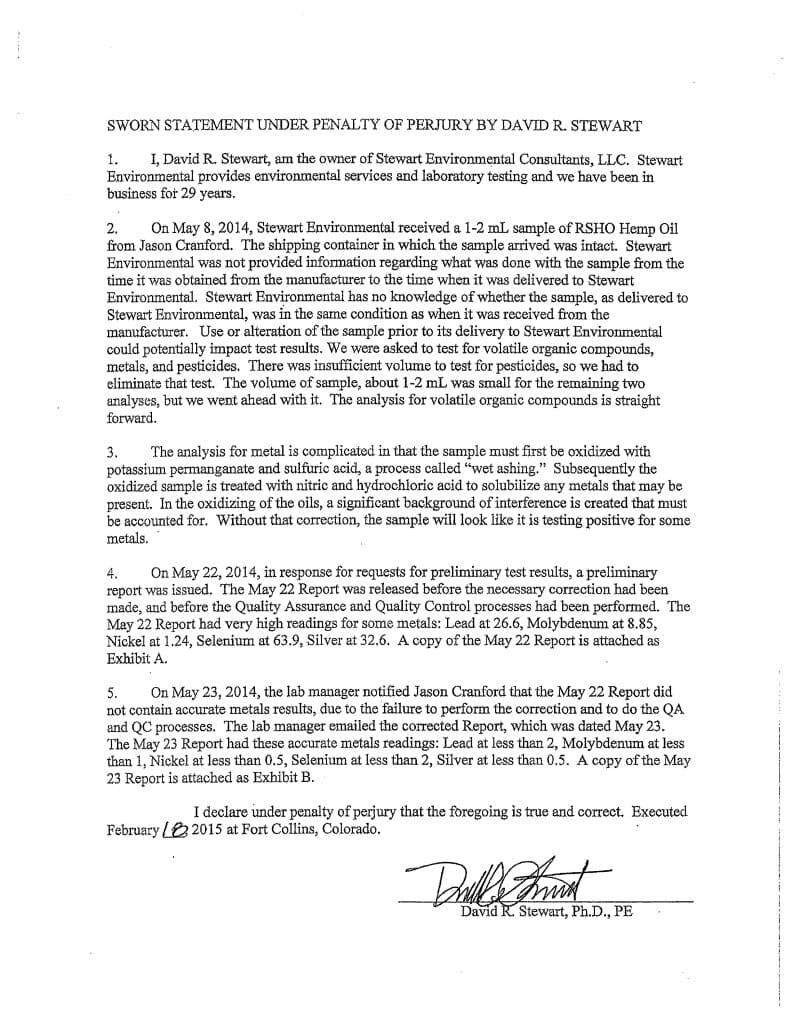